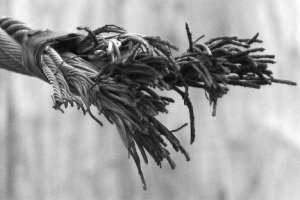 “Much of life is about correctly determining on whom and on what we should finally give up.”

The above is a quote by author and philosopher Alain de Botton, and one that hits the nail on the head for me.

How good are you at letting go? Because I am hopeless at it. You see, I am, by nature, persevering, tenacious and accommodating. These attributes are very helpful and produce great results in my sales job because I am an optimist and never give up, but when it comes to men and relationships, they completely backfire.

Someone Like You
I recently bumped into an old flame in China, of all places. I was in Beijing, on business, attending a reception party, when I heard my name and felt a hand on my shoulder from behind.

I was gobsmacked when I turned around and saw him standing in front of me, smiling, looking as tall, as dark and as handsome as ever. He had started a long sabbatical last year, had moved back to his home country, on the other side of the Earth; I did not expect to see him again for a good few years.

This wasn’t just any old flame; this was THE old flame. Fifteen or so years ago that charming smile had made me swoon and become besotted with him. I had heard bells ringing; I had seen us happily married, sitting by a pool, while our two kids played, chasing each other, me discussing books and the state of the book industry with his intellectual parents.

I had met nice, attractive men before him, but he had been the first one my brain had registered as “husband material”, and not only because of his looks or personality. We worked in the same industry, we were both salespeople specialising in Asian territories, he was learning Japanese, loved Oriental foods, jet-setted round the world. He had grown up in a middle-class family like mine, who valued hard work and perseverance, he was highly ambitious and driven, yet totally modest, and a gentleman through and through. He ticked all my boxes, and more. I fell for that, and hard.

That was a long time ago. He is now happily married with a couple of kids; they probably live in a house with a swimming pool, just as I had once dreamed. You know Adele’s song, Someone Like You? Story of my life.

We are still friends, very good friends in fact. But I was in love for so many years the process of letting go of that pang I felt every time I walked into him at industry events and trade fairs was a long one. I only recently achieved some kind of closure, long after I had myself got married. For years I blamed myself for being one of those “women who love too much” and my inability to give up on things and people not worth fighting for.

Yearning
When it comes to love, how do you measure how much of it is healthy and when does it start becoming obsessive? Where do you draw the line between controlled loving sentiments and unbridled passion? And is there anything wrong with loving someone so much that it hurts?

I once went out with a psychotherapist, who told me we seek love again and again because we crave the intensity of the pain brought on by yearning for someone. The pain makes us feel alive, he said. There might be some truth in this, but I reckon love only causes hurt because we wish to possess and control the object of our desire.

If we…if I…could only learn to love without wanting to enclose or entrap the loved one; if I could love, even when I cannot have them close, how much more liberating and easy love would be. But is it realistic?

I have met other men since Old Flame ceased to burn a hole in my heart. Many were like ships passing in the night; a few others left deeper marks, and one, I suspect I may still be in love with. As it were, because when you think about someone from the past, you assume they haven’t changed and you haven’t changed, but you have, and they have. You are in love with a memory, not a real person.

Enough
This is what I felt when I walked out of the party in Beijing, leaving Old Flame surrounded, as usual, by a flock of women who had gathered, trying to make small talk with him. In the past I’d have dropped everything for a chance to be alone with him; I’d have ignored and put up with the gathering crowd while he played out his role of popular/everybody-loves-me guy and successful entrepreneur. I’d have sacrificed my self-respect for a minute of his attention.

But I didn’t this time. I realised I could never finish a single conversation with him because someone always barged in and started another. It occurred to me that being liked by a generic all was more important to him than being liked by a specific one. That talking to anyone who led to a business opportunity took priority over catching up with an old friend. I think I always knew that but didn’t want to admit it. I wanted to believe he was Prince Charming and could not put a foot wrong.

I’d had it, I left. For once, I put myself first. I chose to go somewhere more private for a drink with a good friend and giggled the whole evening, sipping Bloody Mary, not once thinking about Old Flame.

Embers
Starved of oxygen, the fire is long extinguished and for that I am relieved. But I was astounded by the realisation that the person I once loved so deeply and for so long was not someone I would have loved now, nor would I care to fight for his friendship.

The relentless ambition I used to admire so blindly now feels tiresome and jaded: how often does one have to prove oneself and what for? A day or two later, at the breakfast table of our hotel, he tells me he is doing an MBA, planning a new business, running marathons, playing competitive tennis in different continents, making his kids learn Mandarin, as it’s the language of the future. I listen, unimpressed. I notice, dispassionately, his bulging biceps and the hunky torso underneath his yellow Nike T-shirt, the result of years of disciplined training in the gym. I see the beautiful, familiar green eyes that look at you but rarely through you.

What I used to deem the “perfect” man no longer floats my boat. Instead, I catch myself being attracted to men who wear their vulnerabilities on their sleeves, whose most interesting bulging parts are their flaws, their weaknesses and human failings. Perhaps because they represent a reflection of myself as an imperfect human being, who awkwardly makes mistakes again and again. It’s a good sign. It is a sign I like them because I also like myself more.

Warts
Old attachments are like warts: they have been part of you for so long, cutting them off is like self-mutilation. Of course it hurts, of course it bleeds, but it is a necessary evil for you to move on.

Old Flame was, in the end, a surprisingly uncomplicated door to close. But I have other past attachments I believe go beyond the sexual; they are more of a soul-to-soul connection, and those I am not confident I can ever sever because I love their spirit as much as or more than their physical representation on earth, if you know what I mean.

It is ridiculous, I know. I am not a monk, give me a break.

But then I am not capable of living without loving.

Error: Twitter did not respond. Please wait a few minutes and refresh this page.

Feminism is for everyone!

A Good Blog is Hard to Find

from the life of a small person